Question: if you have 12 wives, 300 concubines, and staff to fill 1500 servants’ quarters, how do you feed them all?
Answer: If you are Jai Singh, King of Jaipur, living in Amber Fort more than a few years ago, you use REALLY BIG pots.

The Tourists Who Should Not Have Been

My sweetie and I took some young guests from the US to Jaipur the other day, to see what there was to see. On the way, we stopped at a hotel/restaurant to use the facilities and decided that a light snack might be in order. It was a bonafide restaurant, after all, not street food, right? And we were with someone who should know…..right, Sweetie?

Maybe the menu should have given us a clue. Have a look. We had a choice of SOAP (soup), a choice of SOTT BEVRGS (I think that meant soft drinks, or soft beverages) that included hot COFFE and LEAMON tea. We could also get some STEEM RICE and some CARD (curd, meaning yogurt). So we joked that the aloo prantha (kind of like a spicy potato pancake) was probably the safest option, and joked that if we went down, we’d all go down together (not at all really thinking that we would, because we weren’t REALLY tourists, we were with a native who would stop us if we were REALLY about to get into trouble, right, Sweetie? And, besides, we were very careful to only drink bottled water, and hot coffe (coffee) and tea, which are made with boiled water.

Well every one of us, except my dearest sweetie, did indeed go down that night. Some of us worse than others. The two young men with us (who shall remain un-named to protect their dignity) spent what they both called the worst night of their lives, sleeping (well, not really sleeping, exactly) in the bathtub and the shower respectively.

We really don’t know whether to blame our “rest” stop for ruining the “rest” of the trip, but I have my suspicions. I suggest that we not act so much like dumb tourists next time. Right, Sweetie?

A Slice of LIfe

Sorry, that was bad. But I think I captured a small slice of it on the way to Jaipur, when we stopped to have the fateful snack I mentioned in my last post.

I thought I was getting candid shots of this family going about their day, but when I zoomed in on the pictures later, I found that I was SO busted. They were all looking my direction and smiling their best smiles!

The boy standing in the green tub is washing clothes, using his feet as the agitator.

Two women show up carrying hay for the buffalos on their heads.

Then the tiniest one, seen in the last picture, gets a bath standing in the blue tub. He was NOT AT ALL happy about it, either. I’m guessing the water was pretty cold.

Be thankful for your water heaters, children! (And your parents’ washing machines!) 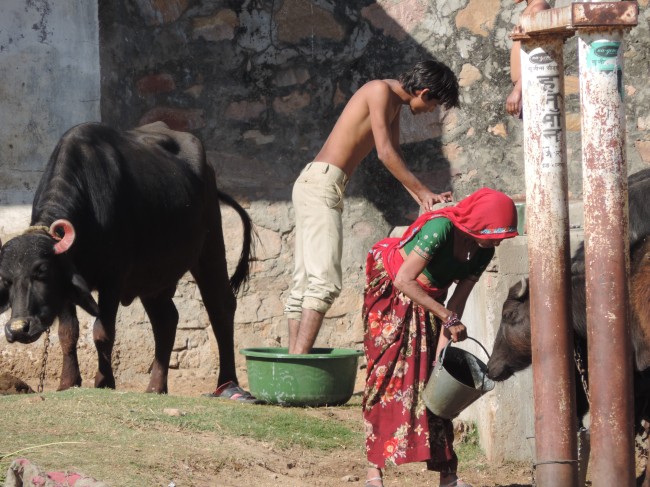 I don’t know if you can see this well – I couldn’t seem to be able to compensate for the glare on the glass because of the position of the sun – but this is the oldest wheelchair I have ever seen, in one of the earliest known (to me, anyway) wheelchair accessible facilities. There are built-in ramps all over the Amber Fort in Jaipur.

What was the impetus for this, you might ask. A monarch with a disability? Nope. Not exactly. The queen had to be wheeled around on special occasions, because she was so burdened down under all her robes and crown and jewelry (more than 40 pounds of it) that she couldn’t walk. Now THAT’s some major BLING!